You are here: Home / Fiction / The Apostate Prophet; A young Jew’s account of the first Islamic State. Kindle Edition 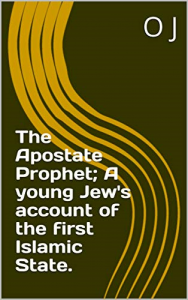 About The Apostate Prophet; A young Jew’s account of the first Islamic State. Kindle Edition:

This novel is about the lesser-known tragedy that befell the Jews of Medina and its environs. In 662 CE, the Prophet Muhammad migrated to Medina to escape intense persecution. This period in early Islamic history became known as the ‘Hijrah’ (Arabic; migration). Overnight the Prophet became the king of this city.
Medina and its environs had many Jewish tribes. These Jews were now living in the first Islamic State. The Jews and Arabs of this region had for centuries been torn asunder by civil war. In return for peace and prosperity, the Jews signed a peace treaty with the Prophet. This peace treaty allowed the Jews full religious freedom and protection in the first Islamic State. This peace treaty also stipulated the Jews must defend the first Islamic State should it be attacked by its enemies.
The Prophet’s persecution, plunder, murder and expulsion of various Jewish tribes of Medina would be forever morally questionable. Probably for the first time in Islamic history, we finally have an eyewitness account by a young Jew who lived through those extraordinary times.
Joshua, a young Jew from a wealthy and influential Jewish tribe, is the voice for all those Jewish tribes which lived, suffered and perished in the first Islamic State. He relates the horror of living in the first Islamic State. The never-ending wars, the beheading of infidels and captives. The slave trade, and how homosexuals, women, Christians, Jews, and polytheists fared under Islamic rule and law.
Joshua, who was a servant to the Prophet, gives us unique and intimate accounts of the man who was to become a colossal historical figure. To this day, the Prophet is considered by most Muslims to be the ‘greatest man that ever lived’. His many faults and shortcomings are overlooked or excused. The Prophet’s ordinary and mundane side is exposed here.
Here we have one man’s extraordinary account of a very pivotal point in the history of Arabian Jews. Islam was the beginning of the end for the Jews of Arabia. Their history, culture, language, religion and architecture destroyed within a decade. Above all, this is a young man’s story of the terrible human cost of tyranny. How ordinary people are expendable by men who want power, greatness and immortality.
This is Part One of this novel. Part Two will be available in the spring of 2021. Part One contains a riveting Appendix which includes a Question and Answer section.

Author Bio:
I am a struggling author from the United Kingdom. I wrote Part One of ‘The Apostate Prophet; A young Jew’s account of the first Islamic State’ during the lockdown. I hope you enjoy Part One. Please let me know what you think of it. I am 35-years-old and live in London. I wrote this novel because it is vital people learn about this Jewish tragedy that has been long forgotten. I am hoping to make this novel a success. Therefore, please share and promote if you like it. Thank you so much.