You are here: Home / Featured Books / The Assassination Game by Anthony O’Connor 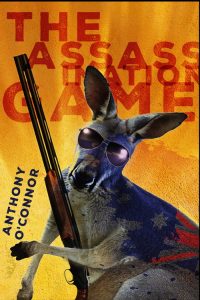 The Assassination Game by Anthony O'Connor

Barry has been forced into a dark-web based gladiator game. Forty contestants with different weapons fighting it out on the streets of Canberra. There can be only one survivor – who will get a cool two million in bit-coin. His best mate Simon works for the Australian Secret Spy Agency (the ASSA). He’s trying to find out who is running the game, and to save Barry. He summons a couple of operatives from the Special Ground Services (the SGS) to provide some firepower if needed.

Australia has become a violent place. The new Prime Minister, Pepper Bennet, who heads the Australian Anti-African Party (the AAAP), has pushed through the seventeenth amendment to the constitution guaranteeing to all the right to bear arms, openly, up to and including rocket launchers. Cricket and even net-ball have become blood sports.

Rosencrantz and Guildenstern are running the game. But who are they? And behind them lurks the evil, sinister figure of Hassan-i Sabbah. His motives are not at all clear. But the crows are definitely on his side.

A fast high-action thriller with a high body count. And a very dark, funny and sarcastic look at the near future.

Buy the book, and follow the author on social media:
Get This Thriller Book From Amazon.