You are here: Home / New Books / The Autumn of Andie By John V. Madormo 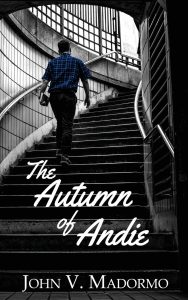 About The Autumn of Andie By John V. Madormo

Which is stronger–the courage to right a wrong, or the fear of revenge?

High school junior Paulie Passero considers himself a social misfit. He is sixteen years old and has never had the courage to ask a girl out on a date. He thinks he’s a poor excuse for the average male…until he experiences something far worse. Paulie witnesses an unspeakable act by a member of the football team under the bleachers one afternoon. The star linebacker threatens him with physical harm if he tells anyone what he has seen. Paulie is at a crossroads. Should he protect a girl’s reputation? Or defer to the oversize bully intimidating him? Dating has suddenly taken a back seat to this new dilemma.

John Madormo, a Chicago area screenwriter, author, and college professor, has created a body of work that has attracted the attention of motion picture producers and publishers. John has sold a family comedy screenplay to a Los Angeles production company, is the author of a mystery series with a major New York publisher, and was recently named the Grand Prize winner of a national writing competition.