You are here: Home / Adult / THE AWAKENING OF MEENA RAWAT 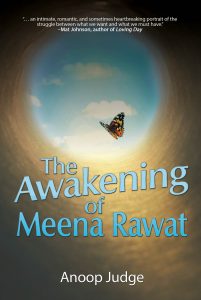 About THE AWAKENING OF MEENA RAWAT

Every day, twenty-eight-year-old Meena Rawat is hounded by inner voices reminding her to be grateful for the middle-class American life she has–even if she is stuck in an unhappy marriage. She and her daughter are both safe, clothed, and fed, more than she could say for herself as a child. Born into the “Untouchables” caste in a small village in North India, Meena frequently relives the nightmare of abuses and slurs she suffered in an orphanage. There is only one bright spot in her memories: the fellow ‘Untouchable’ orphan who became her best friend and first love, Ramu.

When Ramu reappears in her new American life, he’s different. Unlike her, he has cast off the shame of their upbringing and become a confident entrepreneur. Their meeting rekindles a lost passion and the two find they share a mutual sense of obligation to help the children of the outcast community they left behind. Meena fantasizes about a future with him, but will her responsibility to her daughter–and the certainty that she would lose custody–keep her chained?

Born and raised in New Delhi, Anoop Judge now resides in California. She is married with two nearly grown and fully admirable children, but she’s also a recovering litigator, a former TV presenter, and a 2019 Pushcart Prize nominee.

She is the author of two novels: THE RUMMY CLUB, which won the 2015 Beverly Hills Book Award, and THE AWAKENING OF MEENA RAWAT.

Her essays and short stories have appeared in Green Hills Literary Lantern, in Rigorous journal, in Scarlet Leaf Review, in Ornament Anthology, and in Litbreak magazine.

If she’s not traveling, you’ll find her walking her Westie Terrier, Sheru, with a podcast in her ear. A motto she lives by: “The best things come from living outside of your comfort zone.”