You are here: Home / LGBT / The Awakening of Rae By Sananda Allsgood 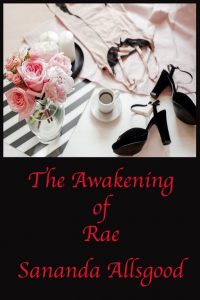 About The Awakening of Rae By Sananda Allsgood

Rae came from a conservative, religious family and lived that life until her husband, Frank, was sent to Afghanistan for nine months. Looking for something to pass that time, she signed up for a yoga class, offered through the base recreation center. Meeting another military wife who was also looking for a yoga class, Rae began her walk into a whole new lifestyle and the realization that marriage, children and adult responsibilities didn’t equal death or being old. Doors began to open for her in areas that had never been something she had ever thought of. Was she prepared for the journey she was embarking on and how would her upbringing figure into it?

Sananda Allsgood is a new author who says his inspiration comes from his soul. The story line playing out in his mind and then transcribing it to the written word. This is the fifth such book he has written in this manner, although different genres. Sananda started writing after a huge shift in his life and an experience of Spiritual proportions that took him in the realm of Near-Death-Experiences, although he maintains it wasn’t Near Death, but actual physical death only to return moments later, after the experience completed.