You are here: Home / Fantasy / The Bandit (Fall of the Swords Book 2) by Scott Decker 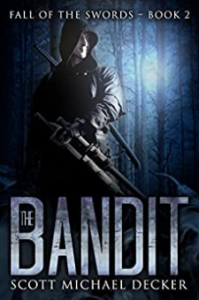 About The Bandit (Fall of the Swords Book 2) by Scott Decker:

Tired of lying in wait, the exiled Noble Bandit seizes his chance at revenge. Meanwhile, as the birth of the Royal Twins nears, Peasant General Guarding Bear is repatriated by the Emperor.Fearing for the safety of his heirs, the emperor orders the general to lay siege to his enemy’s fortress. In preparation, the general recruits the aid of a powerful wizard and a skilled young healer – but none of them suspects a traitor in their midst.As loyalties are tested and new alliances made, who will rise above and claim victory as their own?

Author Bio:
Scott Michael Decker, MSW, is an author by avocation and a social worker by trade. He is the author of twenty-plus novels in the Science Fiction and Fantasy genres, dabbling among the sub-genres of space opera, biopunk, spy-fi, and sword and sorcery. His biggest fantasy is wishing he were published. His fifteen years of experience working with high-risk populations is relieved only by his incisive humor. Formerly interested in engineering, he’s now tilting at the windmills he once aspired to build. Asked about the MSW after his name, the author is adamant it stands for Masters in Social Work, and not “Municipal Solid Waste,” which he spreads pretty thick as well. His favorite quote goes, “Scott is a social work novelist, who never had time for a life” (apologies to Billy Joel). He lives and dreams happily with his wife near Sacramento, California.