You are here: Home / Fiction / The Battle (Freedom In Healing Book 2) 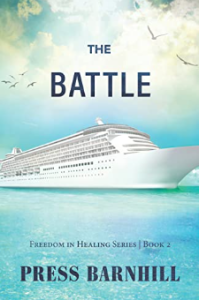 About The Battle (Freedom In Healing Book 2)

Darleen Wilson has just been given a huge boost in her prayer ministry–her hubsand, Roger, has joined the team.

In this continuation of the “Freedom in Healing” series, Darleen and her group of prayer warriors take a cruise on the luxury liner, The Espirit. During the trip, the group of six encounter multiple attacks of spiritual warfare. With each one, the stakes escalate higher and higher.

Bonding together, the group of ordinary people from Rockton, Illinois, use the power of the Holy Spirit to fight off the ever-increasing intensity of the attacks. But is the relatively new group strong enough to overcome their biggest obstacle to date and help those in desperate need of inner healing?

Press Barnhill had a varied career in business management and education. He earned his doctorate in 2002 and taught for the University of Saint Mary and Liberty University leading to retirement in 2017. In 2010, he began learning and practicing healing prayer including all four levels of training by Christian Healing Ministries (CHM). Later training included the Bethel Sozo model of healing prayer and being certified as an Issue Focused Minister by Restoring the Foundations (RTF).

Press prayed with over 500 people including almost 200 at a prison. He has attended numerous conferences and trainings on healing and deliverance including those by Global Awakening, CHM, Bethel Sozo, and RTF.