You are here: Home / Featured Books / The Bird Tribunal 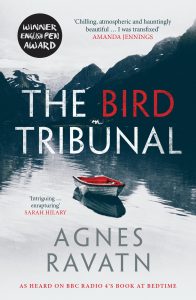 About The Bird Tribunal

Two people in exile. Two secrets. As the past tightens its grip, there may be no escape…

TV presenter Allis Hagtorn leaves her partner and her job to take voluntary exile in a remote house on an isolated fjord. But her new job as housekeeper and gardener is not all that it seems, and her silent, surly employer, 44-year-old Sigurd Bagge, is not the old man she expected.

As they await the return of his wife from her travels, their silent, uneasy encounters develop into a chilling, obsessive relationship, and it becomes clear that atonement for past sins may not be enough…

Haunting, consuming and powerful, The Bird Tribunal is a taut, exquisitely written psychological thriller that builds to a shocking, dramatic crescendo that will leave you breathless.

Agnes Ravatn (b. 1983) is an author and columnist. She made her literary début with the novel Week 53 (Veke 53) in 2007, followed by three critically acclaimed and award-winning essay collections: Standing still (Stillstand), 2011, Popular Reading (Folkelesnad), 2011, and Operation self-discipline (Operasjon sjøldisiplin), 2014. In these works Ravatn shows her unique, witty voice and sharp eye for human fallibility. Her second novel, The Bird Tribunal (Fugletribuanlet), was an international bestseller, translated into fifteen languages, and winning an English PEN Award, shortlisting for the Dublin Literary Award, a WHSmith Fresh Talent pick and a BBC Book at Bedtime. It was also made into a successful play, which premiered in Oslo in 2015. The critically acclaimed The Seven Doors was published in English in 2020. Agnes lives with her family in the Norwegian countryside.