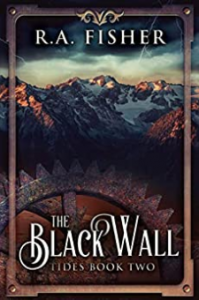 About The Black Wall (Tides Book 2) by R.A. Fisher:

When Syrina finds Anna and Pasha, survivors of General Mann’s assault on the valley hidden in the peaks of the Black Wall, she realizes they may be the key to discovering what she is. But after feelings she didn’t think possible well up for Pasha, things grow complicated.With the help of Ves, pirate-turned-smuggler, they pursue Mann across the continent. However, growing tensions between factions within the Church of N’narad make the trip more perilous than they counted on.Can Syrina find the key to herself and the voice in her head, and find revenge against her master? And what price will she be willing to pay?

Buy the book, and follow the author on social media:
Buy the Book On Amazon.
Author Bio:
Robert Fisher has lived in Hiroshima, Japan with his wife and five-year-old son since 2015, where he occasionally teaches English, writes, and pretends to learn Japanese. Before that he lived in Vancouver, Canada where he worked in the beer industry and mostly just cavorted about, getting into trouble and eating Thai food. He placed fourth in The Vancouver Courier’s literary contest with his short story The Gift, which appeared in that paper on February 20, 2009. His science fiction novella The God Machine was published by Blue Cubicle Press in 2011 under the name Robert Fisher. He has been trying to write stories since he was four years old.