You are here: Home / Mystery / The Case of the Copper King By MK McClintock 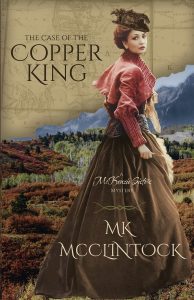 About The Case of the Copper King By MK McClintock

Clever and feisty Cassandra McKenzie engages her newest assignment for the Pinkerton Agency with a knack for deception and a blade in her boot.

Smart, skilled, and unafraid to get her hands dirty, Cassandra grudgingly takes on a new assignment in one of Colorado’s busiest mining towns, where murder and theft draw her deep into a puzzle of lies, quarries, and forgery.

When the mysterious and handsome Quinn Morgan is enlisted to help solve the case, she reluctantly accepts his presence for an undercover scheme meant to draw out the crooks and retrieve the stolen money before they end up buried in a mountainside. Will their talents be enough to untangle truth from deceit before they run out of time?

Ride the rails to Durango at the turn of the century with Cassandra McKenzie, a woman cunning enough to solve the toughest cases in some of the Rockies most rugged and beautiful places.

Immerse yourself in THE CASE OF THE COPPER KING, a stand-alone novel in the delightfully entertaining McKenzie Sisters Mystery series.

Award-winning author MK McClintock writes historical romantic fiction about courageous and honorable men and strong women who appreciate chivalry, like those in her Montana Gallagher, British Agent, and Crooked Creek series. Her stories of adventure, romance, and mystery sweep across the American West to the Victorian British Isles, with places and times between and beyond. With her heart deeply rooted in the past, she enjoys a quiet life in the northern Rocky Mountains.