You are here: Home / New Books / The Creepy Creepy Tour by A. L. Dawn French 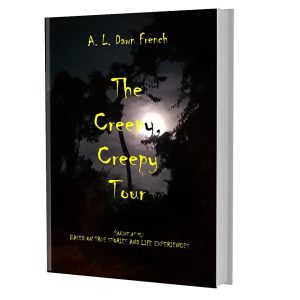 About The Creepy Creepy Tour by A. L. Dawn French

Fifteen year old Peanut joins The Creepy Creepy Tour. Over the three nights that make up the night of the dead: Halloween, All Saints and All Souls, she gets introduced to the alternative side of Saint Lucia:
The world of the dead.

Starting at midnight at a different cemetery every night, learn about:
White horses at dances.
Deals with the devil to build bridges.
Haunted schools and cemeteries.
Human sacrifice in the name of power.

Using actual sites, historical facts and real life experiences, this Peanut Tale weaves a tour that anyone can follow… if you dare.

A prolific writer A. L. Dawn French has had her work featured locally, regionally and internationally since her pre-teen years. She has been part of publications such as “Creation Fire” 1990 published by the Caribbean Association for Feminist Research and Action (CAFRA), “Women’s Future” 2000 published by the United Nations Development Fund for Women (UNIFEM), “Opus Spectrum” 2015 published by the Saint Lucia Writers Forum and the “Dictionary of Caribbean and Afro-Latin American Biography” 2016 published by Oxford University Press.

Her works have been presented at the World Expo in Dubai (2021), the Caribbean Festival of Arts commonly called CARIFESTA; at CARIFESTA VII (St Kitts), XI (Suriname), XII (Haiti), XIII (Barbados) and XIV (Trinidad & Tobago). She is the 2013 Winner of the Saint Lucia National Arts Festival (NAF) for fiction for her works INVICTUS and INSIDE STORY; the 2014 NAF People’s Choice Award for fiction for “NÖEL”, 2014 NAF People’s Choice Award for non-fiction for the series “CAREERS” and is responsible for the bestselling series “The Commonsense Collection” and the Historic Series which focuses on the PROFILES of Saint Lucians with its spin off THE STORY OF…

Her latest works are about an eight-year-old heroine named PEANUT who through her adventures shares morality tales with pre-teen readers. The success of the series led to the spin off SABINE STORIES were readers follow the adventures of an adult Peanut.

For her years of work in educating children through her stories, in 2021, Dawn was inducted into the Saint Lucia 100 Women Hall of Honour.