You are here: Home / Featured Books / The Day You Made My Life Colorful 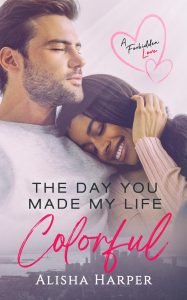 About The Day You Made My Life Colorful

SHE WAS NOT LOOKING FOR LOVE. HE HAD NO PLANS TO LOVE. TOGETHER THEY FOUND LOVE. BUT, THEY FOUND IT IN A TIME WHERE LOVE IS SEPARATED BY COLORS.
The time is 1975. The future seems to be looking bright, with the New York law abolishing the segregation.
But everyone knows things aren’t going to change overnight. Some refused to observe the law. Some became more discreet with their discrimination.
But, in this romance of Noah Wittlebrock and Mayla Aayana, the color of their skin, the color of their past and the color of their stature did not matter.
He was white. She was black.
He was a Casanova. She had been hurt by love.
He was from Manhattan. She was from Brooklyn.
They were two people who should not have found each other, but the true colors of their hearts brought them together.
He became her wall.
She became his eternal blossom.
No color was stronger than the love paint they created. They vowed to defy all odds. But, in life…
There are just odds no one could conquer.

This ebook has been written by a Ghostwriter.