You are here: Home / Action & Adventure / The Days After The Music Died by A.G. Kimbrough 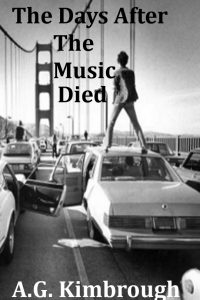 About The Days After The Music Died by A.G. Kimbrough

The Days After The Music Died is a Dystopian novel about a post EMP world. A family struggles to escape the madness that is burning the cities and reach a refuge they established on a Mississippi River island.

October second appeared to have the makings of a nice day even though Richard Erickson wouldn’t be able to enjoy much of it. He would soon be starting a twelve hour shift in the Emergency Room at San Francisco County Hospital. The young man would complete his medical internship in eleven months.
Richard’s day began at seven, when he showered, dressed, and stopped by Mickey D’s for breakfast. By the time he reached the Bay Bridge, the sun was breaking through the fog, and the Oldies Rock on his special playlist had just finished Buddy Holly’s “Peggy Sue”.
Halfway through his second cup of coffee, with the stereo now playing Richi Valens “La Bamba”, Richard felt that life was good. As he approached the Treasure Island exit, the Tahoe died, along with the stereo. Taking a quick look at the gas gauge, he saw the whole panel was dead. Coasting to the curb, he noticed that his car was not the only one stopped. Nothing was moving.“Oh Shit. its really hit the fan!” he exclaimed.
A quick check of his iPhone revealed that it too was dead.
Richard opened the door and stepped out. A man in a Tesla jumped out as smoke burst from under the hood.
“What the hell is going on?” He demanded.
Richard answered. “I think we got hit by an EMP attack.”
“What does that mean?”
“It means the end of the world as we know it. I suggest you get home any way you can. It will be bad everywhere, with no power, water, or food.”
The man looked unconvinced. He then looked over to his burning car. Without a word, he started toward the off ramp.

Author Bio:
About A.G. Kimbrough
A.G. Kimbrough is a man with a wide range of life experiences. He grew up on the wrong side of the tracks in a small New Mexico town, and joined the Navy as soon as he turned 17. As a young man, he worked in the electronics side of the defense industry. Later, he spent over 30 years as an engineer, exec, and CEO in the welding automation industry. After a medical wake-up call, he retired to an island on the Carolina coast and ran a fishing charter business for a few years.
An insatiable reader since boyhood, he started writing for his own pleasure, when bits of time were available. After retiring for the fourth time in 2012, he embarked on a writing and publishing adventure that is still ongoing.