You are here: Home / Adult / The Deal 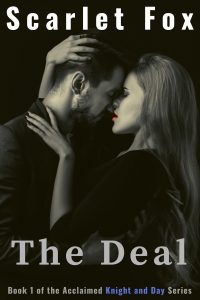 She’s had her eye on him. When Kelly offers herself to Jack, she knows exactly what she’s doing. She makes him an offer he can’t refuse and an intense relationship starts with that three words.

This brilliant work is not just smoking hot erotica. It’s also a shining example of what a D/s relationship can be. Every submissive wants a perfect Jack, and every Dom needs a Kelly. And every reader will love watching the two figure out how to fan the flames without getting burned.

“I can’t say enough about these books. This is what Fifty Shades should have been.”
– Jen B – Early Reader of the Knight and Day series.

Author Bio:
Scarlet Fox is the pen name for a traditionally published author who wishes to remain anonymous while writing erotica. She lives in Las Vegas with her husband.

Scarlet calls herself an “unrepentant submissive” and is a tireless advocate for both women’s rights, and sexual freedom. She won both of the Chained Hearts Erotica contests this year and hopes her books can inspire people to have a more fulfilling sex life.