You are here: Home / Featured Books / The Destroyer of Worlds 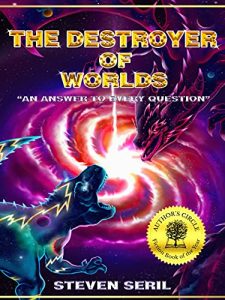 About The Destroyer of Worlds

A 10x award-winning novel that Readers’ Favorite said “rightfully deserves to be called the Book of the Century” and was named “Fiction Book of the Year” by Authors Circle.

In this epic story, an all-seeing T-Rex recalls the violent history of the cosmos including Heaven’s War, the Titan War, Ragnarok, and the Apocalypse. These catastrophic events converge as beings from all of mythology take sides in a war between ALIEN DINOSAURS and COSMIC DRAGONS!

Steven Seril, an Asian-American author, is quite a story! He is a 9x gold-medalist in powerlifting (including a first-place finish in an IPL World Cup) and a 2x football champion (as a player and a coach). He is now a 10x award-winning author! Authors Circle named his debut novel the “Fiction Book of the Year!” It was also awarded the 1st-place prize in overall Fiction for the Firebird Book Awards!

In 2003, at the age of 13, he recorded a 181 IQ. He was invited to the White House that year for this and other accomplishments! Seril graduated with honors from the University of Hawaii at Manoa with a degree in English. He also worked at the University of Hawaii as a writing tutor and was considered one of the best writers and writing tutors in the department. He was an educator for 14 years before taking up a humbler job as a janitor.

Many of his greatest accomplishments came after suffering a hit-and-run accident in May 2016 that changed his life, leaving him with limited movement & amnesia for a time. Not only did he succeed in powerlifting and authoring his book following this accident, but he also married his beautiful wife, Diana, a nurse and one of the few Turkmen in the USA. The two met after a chance encounter on public transit that garnered considerable media attention.