You are here: Home / Fantasy / The Egg by William Becker 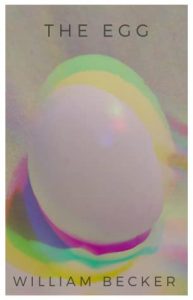 About The Egg by William Becker:

When it comes to having kids, there are no such things as mistakes, just “surprises” or even to quote the late Bob Ross, “Happy accidents.” May Dawes isn’t so sure about that when she gets pregnant, considering she isn’t attracted to men and has never had sex with a man. The beauty of childbirth becomes much less beautiful when her child is revealed not to be a child at all, but a strange, alien egg that seems to be driving her every action. THE EGG is a horrific and hopeless journey into maternal instinct, depression, obsession, and loneliness.

Author Bio:
William Becker is a surrealist horror author with a mind for the more uncanny and stranger sides of the universe. Originally adopted from Saint Petersburg, Russia, he grew up in Boone, North Carolina. His work is known for being non-traditional, gritty, and psychedelic in influence. While originally being known as a practitioner of horror in the vein of David Lynch, Silent Hill, and Ari Aster, Becker’s work encompasses elements of romance, sci-fi, drama, psychedelics, and mystery. Above all things, his works are complex, mysterious, and highly allegorical, constantly pushing the boundaries of what is possible within the world of writing, while also providing compelling storylines that transcend the cliches of modern horror.

His first novel, WEEPING OF THE CAVERNS, was written when he was 14. After eight months of writing, editing, taking stress breaks (one of which he used to create his first major short story, THE WHITE SHADE,) and revising, the story was published soon after his fifteenth birthday.

Following a four year gap that focused on a very successful stint on Wattpad which consisted of a short story becoming featured by the website, his second novel, GREY SKIES, was independently published in mid-2019; tacked onto the release were two short stories: THE WHITE SHADE and THE BLACK BOX. Months later, Becker began college at the University of North Carolina Wilmington, where he became a staff writer for the student-led newspaper, THE SEAHAWK.

In November of that same year, he was published in ATLANTIS CREATIVE MAGAZINE with his story NEW YORK ONIONS. This story was released for free on his website in mid-2020, prompting the release of three free short stories: a “romance” with elements of social-critique in SEVENTH CIRCLE, surreal horror-drama in the form of THE EGG, and a more depressive drama about suicide in the form of FOR WE ARE MANY.