You are here: Home / Horror / The Entrenched and the Eternal: A battle between two rivals — conflict and tensions abound! by TK. WATKINS 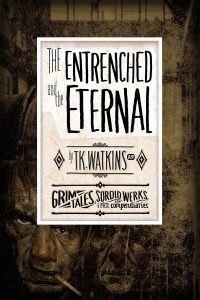 About The Entrenched and the Eternal: A battle between two rivals — conflict and tensions abound! by TK. WATKINS

A slow afternoon at Sal’s Tavern ends with a pair of long-time barflies at odds with each other, leading them to reveal a much longer feud that connects them to a mysterious and seemingly dubious past they share. Are their stories to be believed or are they just putting one on?

Merle and Herb have been frequenting Sal’s Tavern for years, mingling and mixing it up with the other regulars who’ve pulled up to the bar, knocked down a cold one, and shot the breeze. But today is no ordinary day — it quickly devolves into a weird and unsettling muddle. As both men erupt in a fiery dust-up with each other, Merle candidly sheds light on an allegedly long, sweeping past they shared, one entangled in arcane mysticism and hidden, far-reaching secrets concealed from the world. But when he mentions their history goes back centuries, it’s enough to write them off as just another couple of windbags spinning folk tales. However, for all the hot air generally spewed at Sal’s, one thing becomes clear: if you think your life is a drag, just listen to the guy sitting next to you. It can be a whole lot worse — even the epitome of hell.

The Entrenched and the Eternal is a story of lost ambitions, egomania, and unquenchable greed.