You are here: Home / Featured Books / The Eyes Of Courage by James A Fisher 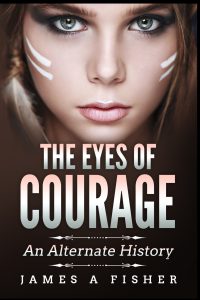 About The Eyes Of Courage by James A Fisher

Tom Hathaway, a student pilot from Virginia Beach, USA is lured through a stone archway in 1976. He enters a world where the US does not exist, and modern English is spoken by no one. The technology is 75 years behind, even though he didn’t go back in time. Abandoned in the America that was never overrun by Europeans, he discovers he’s in an alternate history.
To survive, he must adapt to the ways of the indigenous people and become one of them. Through courage and resourcefulness, he becomes a decorated hero, winning the love of the commander’s daughter. Then, beset by many challenges, he re-invents the airplane for the new world.
Meanwhile, pirates from Caribba threaten to wreak havoc in the erstwhile Chesapeake Bay. There is great fear in the land this will lead to invasion and annihilation. Fortunately, Tom has taught Golden Feather how to fly. Only the courage and resourcefulness of his seventeen-year-old cousin by marriage will save the country from invasion and annihilation. She is the girl with the Eyes of Courage, the ultimate heroine of the story.

As a youngster, the author spent seven years in Africa. He attended High School in Indiana in the 60’s and taught school in the 70’s. In the 80’s he moved to South Carolina and became a Quality Engineer. Now retired, he enjoys cruising around the nearby lakes in his pontoon boat and writing a book or two, seeking to engage the mind of the reader and not just entertain. jfisher4477@gmail.com.