You are here: Home / Fantasy / The Flight of the Griffin: A Young Adult Fantasy Novel by C.M. Gray 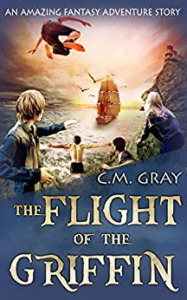 About The Flight of the Griffin: A Young Adult Fantasy Novel by C.M. Gray:

The Kingdom of Freya has fallen deep into the clutches of dark forces.After young Pardigan breaks into the home of one of Freya’s richest merchants, an unexpected chain of events is set in motion. Sent on a quest to complete an ancient spell and restore order to the world, Pardigan and his friends set sail aboard The Griffin.But danger lies at every turn, and they are soon pursued by The Hawk: a bounty hunter who will stop at nothing to end their quest.LONDON TIMES – BEST CHILDREN’S FICTION FINALISTPraise for The Flight of the Griffin:”A lovely, well-written fantasy adventure.” – Times”I loved this book for the rich style in which it is told… full of exciting adventures, magical places and creatures.” – Adriana H, Amazon Review

Buy the book, and follow the author on social media:
Buy the Book On Amazon.
Author Bio:
Born in Essex, England with a heavy dose of ‘travel lust’, C.M.Gray has since been lucky enough to live and travel in many countries around the world. In fact he has lived for more years outside of England than he has living there! Working as a carpenter, fruit picker and even a stint in stock brokering, he has called home Buddhist monasteries in the Himalayan Mountains, the clamor of central Hong Kong to a farm in deep rural Burgundy. Forever vowing to return and sink his roots once again in English soil… some day, he hasn’t quite made it back yet, but does live a little closer these days; just outside of Barcelona in the middle of the forest with his dogs and two wonderful children.C.M.Gray’s writing is mostly fantasy and many of the experiences he has had in Asia, Africa and the middle east come to life in his writing. The Flight of the Griffin, a finalist in The Times/Chicken House literary competition 2013, follows the adventures of a group of young friends as they battle demons and bandits on a magical quest to stop the world from tipping into Chaos. Shadowland blends fantasy with history as an old story teller takes his audience back to Britain’s dark ages and the birth of the Arthurian legend.The Sequel to The Flight of the Griffin, Chaos Storm was published Autumn 2013, while the Sequel to Shadowland, ‘The Shadow of a King’ will be published summer 2015.Please contact me on by email: cgray129@gmail.com or via my website: www.author-cmgray.comHappy reading!