You are here: Home / Fantasy / The Frightened Star (The Paranormal Adventures of West and Jones Book 1) 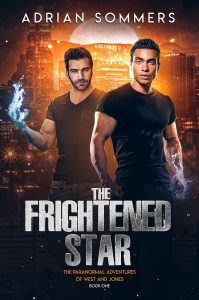 About The Frightened Star (The Paranormal Adventures of West and Jones Book 1):

Olivia Randall, the hottest movie star of the moment, is haunted by a horrific creature that appears to her in disturbing dreams—that is, until the terrifying specter comes to life outside the realm of sleep, causing Olivia’s world to teeter on the brink. But just when things look their bleakest, Becker West and Gunther Jones come into her life.

The former army soldiers and current spiritual warriors are entrusted by Kyrel, their angelic guide, with defending Olivia against Bal-Sharok—the ancient and malevolent entity threatening her existence—and with guarding a mystical statue in her possession that, if coupled with a lost relic, will grant Bal-Sharok apocalyptic power. Theirs, however, is an uphill battle because Bal-Sharok is a master of disguise, and he is hiding in plain sight among a varied cast of Hollywood players.

The stakes of the game are very high as Becker and Gunther race against time to save Olivia from the evil that stalks her—amidst celebrity galas, time travel, trendy nightclubs, budding romance, angelic intervention, lethal magic…and ruthless murder.

Author Bio:
Adrian Sommers, interdimensional man of mystery, is the author of a new series: The Paranormal Adventures of West and Jones. If truth be known, to say that Adrian is an author is somewhat disingenuous because he does not feel that he creates these stories. The characters do. Adrian merely types what they tell him, as they lead him to the places and situations of the realms that they inhabit.

When not channeling from other dimensions the otherworldly exploits of Becker and Gunther, Adrian is sometimes traveling, often living in alternate realities, usually reading, and always acting as butler to a couple of cats in his Southern California hideaway.