You are here: Home / New Books / The Galactic Idiot 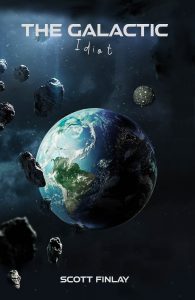 About The Galactic Idiot:

Gary Wright is a good-hearted young man yearning for adventure, having dreamt of space exploration and heroism his whole life. When Gary’s frighteningly ill-tempered uncle, Colonel Virgil Cross, arranges a job for him aboard Terra One, humanity’s very first and most decrepit space station, Gary’s life turns upside down, and the rest of the galaxy flips with him. The one problem with Gary is that he’s a complete and utter moron. In fact, the last thing he says before destroying the moon is, “Oops”.

Suddenly caught in the middle of a galactic catastrophe with more adventure than he can handle, Gary is fleeing two of the galaxy’s most powerful and least forgiving empires in a broken and unpredictable ship, encountering many diverse friends and enemies along the way including: Shii’an, the confident, tentacled rogue with a permanent smirk etched on her face; Korg, a dour, purple goliath who just wants to tinker with machines; Megatroll, the most dangerous computer worm in history trapped in a robot vacuum cleaner; Mon Arun, a shape-shifting reptilian saboteur; and Queen Morgaan, the omnipresent insectoid mother of a trillion mindless drones and a single daughter she’ll protect at all costs.

Author Bio:
Scott Finlay, born in 1989 in the United States, is a professional software developer with an expertise in computer security. For many years he was active in the hacker scene and there known and respected as a skilled white hat hacker. In his daily life he designs complex systems, investigates disruptions, and sometimes tries unusual solutions by thinking outside the box. He draws on his architectural skills while designing his stories and his debugging skills are in many ways similar to those of a detective. Through his technical expertise, particularly regarding software and hacking topics he is able to write accurately.

In 2012 Scott moved to Germany for love and started a family there. As an American living in Europe, he has a somewhat unique view on the world and its politics, and draws inspiration from many of the issues he sees in the world to build dystopian settings and make social commentary.