You are here: Home / Humor / The Headless FloridaMan 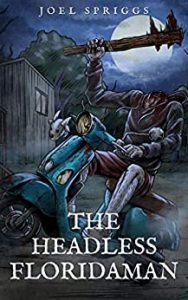 About The Headless FloridaMan

Five tweakers in a Florida trailer park think they’ve committed the perfect crime: kill a drug dealer. They feel pretty good after dumping the body and splitting the loot. The killer crew isn’t as cocky a couple weeks later as the headless drug dealer hunts them down one by one. Will they be able to escape or can they rely on help from a plumber to combat the resurrected menace?

Pick up a copy of The Headless FloridaMan to find out!

Joel Spriggs (1982-?) was born and raised in Frankfort, IN. He graduated from Franklin College of Indiana in 2004 with a Bachelors of the Fine Arts in Computer Science and Broadcast Journalism.

Joel’s first novel, “Over A God’s Dead Body” was published on the Kindle platform in June 2018 and is the first in a planned series surrounding the same characters and fantasy world.

Joel has successfully defended his beard from being stolen 1873 times out of 1877 attempts by his elder brother. On the five occasions he failed, Joel immediately set about growing a new beard and refining his defenses.

Joel lives with his wife and three children in scenic Lebanon, IN. He maintains a website and blog at joelspriggs.com. He is also active on Twitter, @joelspriggs.