You are here: Home / Fiction / The House of Marchesi 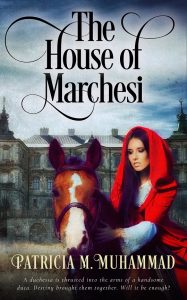 About The House of Marchesi

In 18th century Milan, a duchessa is thrusted from her horse and into the estate of another esteemed member of the king’s court. Lilliana is unable to remember her accident or her identity. Duca Emmanuele notices that Duchessa Rosetta is complacent about their daughter’s absence from the House of Montanari. During the duchessa’s convalescence, she and the duca grow in affection towards one another. The maidservant, Noemi of the House of Montanari silently volunteers to help locate and retrieve the missing duchessa. Noemi enlists the help of her fellow maidservant, Gabriella. Noemi leaves the House of Montanari and encounters a proud vendor of pomegranates. He speaks of a tale of a fallen maiden taken into the care of a duca. He guides her to the House of Marchesi. The duchessa finally recalls her father’s identity. The duchessa wishes to learn more of the duca. He introduces her to various quarters of the Marchesi mansion. The king and queen gather evidence and secure it in the royal vault. Alessandro proposes to her. Lilliana accepts. The Crown decides to proceed with the planned royal ball. All of the esteemed of the Milanese king’s court are to attend.. The night of the royal grand affair arrives. Servants of the Houses of Montanari and Marchesi enter with the assistance of a royal servant. In separate royal chambers, the king and queen officiate Duca Alessandro and Duchessa Lilliana’s nuptials. Duca Emmanuele is right to be concerned for his daughter, for someone has conspired a dastardly plan against the duchessa, but who? The king and queen have the answer and reveals it before the entire king’s court.