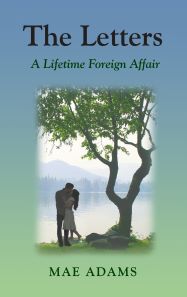 The Letters/A Lifetime Foreign Affair is a love story about two countries, two cultures, two lives, and one love. And the authentic portrayal of an ultimate and profoundly satisfying love relationship evolved between the book’s author and her late husband.
This powerful story is also a collection of two lovers’ letters, respect for cultures, individual lives, and respect for a union in love. It all begins when a rugged, dashing, and disciplined U.S. Marine Corps Colonel, Hewitt Adams, meets the beautiful but strong-willed and knowledgeable Mae Yum from a Korean aristocratic family by chance and fate. Mae’s unexplained prophetic dream under her grandfather’s ginkgo tree, when she was six years old, intertwines two lives with two different views of life.
Full of life lessons and a tender, timeless romance, the letters capture the joys and frustrations that come with love while also revealing the deepest secrets of their hearts. It is poignant, emotional, and at times heartrending. The conversations between them are often frank and brutally honest. The letters display their frailties, strengths, passionate love, and all the human emotions they experienced. The fundamental differences in their cultural upbringing of East and West played a large part in misunderstanding each other and hindered their way to harmony.
The author’s upper-class status and her upbringing in Korean society put many obstacles in the way of their relationship. It is poignant, emotionally charged, evocative, candid, and heartrending. Both lovers provide vivid visual descriptions, particularly of each other and other people.
There is also a portrayal of the richness of the Korean culture, wisdom, profound insight into all types of relationships, and intertwining of life through family and community.

Get This Romance Book.

Mae Adams was born in Korea in 1933 in an aristocratic family. Born as the useless second daughter, not a son, her mother abandoned Mae, and her grandparents raised her in a mountain village where the family retreated upon Japanese invasion in 1910.
Despite attending schools run by the Japanese, her upper-class grandparents raised her to achieve their expectations to meet her standing in Korean society. Her “homeschooling” included exposure to the fundamental philosophies of Korean culture. At the end of World War II, her family escaped from the Communist regime that took over her hometown. Her grandma stayed behind to give the family enough time to run.
Within five years, her family survived the chaos of the Korean War, and Mae became the breadwinner of her family and dreamed of going to America to get a college education.
She met the man of her dream, Hewitt Dayne Adams, an American Marine Corps Colonel, but left him to pursue her education. She continued a long-distance romance with Hewitt for three years until she married him, raised a family, and ran a successful business. This book, The Letters/A Lifetime Foreign Affair, came from it.
Hewitt retired from the Marine Corps, returned to school, got his degree, and became a professor at Clemson University, teaching Asian and American history. Mae, fluent in four languages, taught him Chinese, a required course.
After his second retirement, Hewitt wanted to write Mae’s life story, but his many ailments interrupted him. Mae was his sole caregiver for the last thirteen years of his life. After forty-three years together, Hewitt lost his battle with cancer. While grieving, Mae wrote Precious Silver Chopsticks. Her third book is Coin for a Dream.
Mae lives near her daughter’s family in McCormick, SC, USA.