You are here: Home / Action & Adventure / The Lone Captain by Lewis Crow 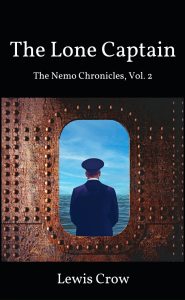 About The Lone Captain by Lewis Crow

Captain Nemo’s son continues his own tales of adventure in The Lone Captain, a sequel to 2018’s The Nautilus Legacy and the second volume of The Nemo Chronicles. Inspired by the work of Jules Verne and written as a memoir, it will delight readers of the first volume as well as those new to the series.

Against a backdrop of Victorian-era political tensions and advances in science and technology, the Nautilus’ crew venture across the world’s oceans to further their twin missions of science and liberty by exploring shipwrecks, aiding the oppressed, and supporting freedom fighters. But everything changes for Nemo when a shocking naval crisis leads to confrontation with his most dangerous foe yet, a zealot whose actions could alter the international balance of power.

I am a life-long naval enthusiast and researcher who has been thrilled since childhood by stories true and fictional about ships and the crews who manned them. An avid ship model builder and adult LEGO fan, I live in Texas with my family.