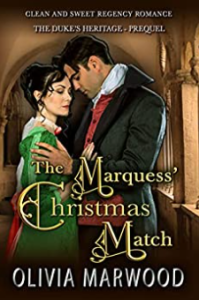 About The Marquess’ Christmas Match: A Clean and Sweet Regency Historical Romance (The Duke’s Heritage Book 1)

A Governess born a Lady, a Marquess with unruly sisters, a conspiracy of parents, a plot to steal an inheritance, a last-minute rescue, a love which overcomes all.

Already on the verge of spinsterhood, The Honourable Miss Georgiana Wingfield, a Viscount’s daughter, has decided to take her fate into her own hands. Becoming a governess seems the best way to save her family from penury, and allow her sisters a Season, as well as allowing Georgiana to avoid the unwanted advances of the cousin who inherited her father’s title. It seems a sensible plan, until the unpleasant new title holder continues his pursuit, much to Georgiana’s confusion.

Edward Calthorpe, Marquess of Billington, did not realize what an insurmountable task his father had set for him when he agreed to stay at Thistlewayte Hall and oversee his younger siblings’ care while his parents, the Duke and Duchess of Thistlewayte, took the eldest three of his sisters to London for the Season. The twin terrors he has been left to deal with — Marjory and Millicent — are determined to avoid any attempt to teach them… anything…. Edward is at his wits’ end when he writes, begging his parents to send yet another governess, for his sisters have caused the most recent one to depart. But the governess they send is nothing like the other governesses, and Edward is fascinated. As Miss Wingfield begins to work miracles with his sisters, Edward finds himself more and more drawn to her – but Lord Gainsbourne, the distant cousin who constantly calls on Miss Wingfield, makes Edward hesitate.

Why does Lord Gainsbourne constantly return when Miss Wingfield never seems happy to see him? Is there some arrangement in place, which Edward cannot, honourably, impinge upon?

As Georgiana becomes ever more desperate to discover the truth, and free herself from the attentions of her odious cousin, she is also more and more aware of the Marquess who is her employer. Can she unravel the puzzle, and save herself before she is trapped? Or will ruin come to everything she cares for, and steal her chance at love?

Will Edward discover the truth in time to help Georgiana? Or will he lose the woman he has come to love to the machinations of the unscrupulous Lord Gainsbourne?

If you love escaping into the Regency era via clean and sweet romances filled with close-knit families, relatable characters, and a guaranteed happily ever after in each book, The Duke’s Heritage is the series for you. Although each book in this series may be read as a standalone, readers may gain more pleasure from reading the books of The Duke’s Heritage in the order in which they are released.

Author’s Note: This book was previously released in the Regency Missives and Mischief collection.

Olivia Marwood is a quiet, reclusive bookworm who writes clean and sweet Regency romances, spending much of her time immersed in the worlds she creates, surrounded by her beloved characters. She loves nothing more than when fictional characters get the happily-ever-after ending they deserve.

When Olivia is not weaving words and spinning romantic tales, she loves to crochet, cross-stitch, savor a good cup of tea, and read. She also adores spending time with the two most important men in her life, her husband and her son.

Olivia comes from a large extended family, and she has remained close with many of them. Her family is a constant source of inspiration to her.

You can connect with Olivia and subscribe to her newsletter at https://sleek.bio/olivia.marwood.