You are here: Home / Horror / The Multifarious Mystique of Big Dan Rob by TK. Watkins 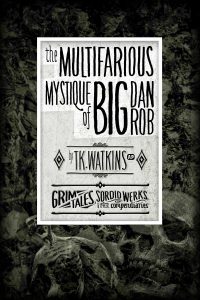 About The Multifarious Mystique of Big Dan Rob by TK. Watkins

In a world where people harbor split personalities, meet one man whose life goes beyond the ordinary, operating in two completely separate worlds — one mundane, one dark and monstrous. His opposing selves ultimately clash, leading toward a potentially devastating outcome. Will he overcome his grisly half before it’s too late?

It is called the Peerage and “Big Dan Rob” Wroblewski — sales executive, husband, dad, and ultimate go-getter — finds himself caught in a nightmarish world where he unknowingly engages in a secret occultist circle, snaring innocent victims and performing esoteric acts of brutality, all for the sake of their master, Don Lope de Barón — the Wolf Baron.

His shadowy persona finally rears its ugly head, penetrating his professional life, with shocking and deadly results. How he grapples with this truth eventually lures him down a path that threatens all that he’s worked hard for, including his most cherished blessing — his family.