You are here: Home / Fiction / The Murder of Sarah Grosvenor by Betsy Withycombe 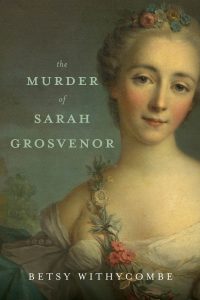 About The Murder of Sarah Grosvenor by Betsy Withycombe

In a small 18th century American village, where the streams ran cool and clean, the soil was loamy, and the people prospered, repeated attempts to end the pregnancy of a prominent young woman resulted in her gruesome death. The Murder of Sarah Grosvenor is a compelling work of historical fiction which revisits those shocking days of deceit, betrayal, and malevolence during the “Age of Enlightenment,” and then further imagines what led to the multiple arrest warrants which were finally issued for the horrific crime some three years later. The factual details of this story may be centuries-old, but The Murder of Sarah Grosvenor is as familiar as contemporary stories of entrenched power and privilege; positions which, when cruelly asserted, demand silence so that the guilty may avoid accountability. A predecessor to modern social warriors, one mythical and courageous child-hero, Rebecca, was willing to risk everything in the pursuit of justice, and it is because of her that the tale of Sarah Grosvenor can at last be told.

Betsy Withycombe has a B.A. in American Studies from American University in Washington, D.C. She lives with her husband and children in Arlington, Virginia. This is her debut novel and it is receiving critical acclaim.