You are here: Home / New Books / The Omega Children – The Return of the Marauders 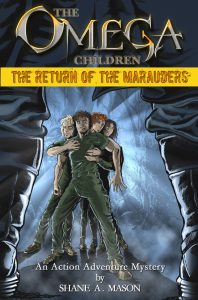 About The Omega Children – The Return of the Marauders:

Parents killed. A Hidden hostile land. The last of their line. They have no idea what’s coming next.

Melaleuca (Mel – la – luke – Ka) is left in charge of her wayward cousins when all of their parents are murdered, and she and her cousins are whisked away to a strange, hidden land to be cared for by a dithering Uncle and a cruel Aunt.

None of her cousins will follow Melaleuca’s lead, as all of their lives, they have been raised with no rules and left to run wild, making it nigh on impossible. What’s more troubling is the land has never progressed past the Victorian age.

When a discovery is made allowing them to use the powers their parents once wielded, she begins to understand. As she tries to guide her cousins using the powers, they are sent to a vicious, cruel, disciplining school where they find children secretly waiting for the Marauders to return. However, the teacher’s seem intent on breaking down Melaleuca’s resolve and crushing the spirits and bodies of her cousins, if necessary.

They are the last of their line. If Melaleuca and her cousins are broken then all they are sent to save will be doomed forever.

The Omega Children – The Return of the Marauders is the first book in a YA semi-fantasy, action-adventure series featuring subterfuges, secret passages, costumes of power, strange beings, and a madman hell-bent on revenge.

If you like hard to put down, fast-paced mysteries, with engaging plot twists revealed only as the characters discover them, and a complex storyline, then you’ll love Shane A. Mason’s compelling Omega Children Series.

GET YOUR COPY of The Omega Children – The Return of the Marauders NOW!

Author Bio:
Shane A. Mason hails from the rugged South Island of New Zealand where a lot of Peter Jackson’s Lord of the Rings was shot.

He wrote his first novel at 18 but upon reflection decided it was a whiney teenage angst-ridden diatribe and shelved it thinking he needed more living and experience.

20 years later after marriage, divorce, time spent in a cult, part-time soldier, chip cooker, proofreader, farm pest remover, truck greaser, accounts sorter-outer, engineering supervisor, bit-part actor, and attaining a 4th dan black belt in karate, and training and working as a naturopath/lecturer – he watched the six DVD series on the making of Lord of the Rings. This led to an epiphany fuelled panic as he realized he had a trail of unfinished novels screaming out to be finished.

Having devoured the Harry Potter series and got frustrated with the eventual predictability of the storylines (come on – let’s face it – they got formulaic), he decided to finish his semi-fantasy action-adventure young-adult novel based around his Prema Ayurveda training. Prema Ayurveda is the art of ancient Indian mind-body-soul medicine. Roughly translated it means “nurturing knowledge of life.”.

Rather than write a textbook, he decided to follow the ancients and couch all the meaning of ancient texts in a cool epic adventure around four teens that represent four parts of the mind.

Shane currently resides in Auckland, New Zealand where he divides his time between writing, marketing, family, and martial arts – though he prefers to daydream and flit off into the nether-sphere where most of the ideas he comes up with are just waiting there for him.