You are here: Home / Mystery / The Pepper Tree By Dave Freedland 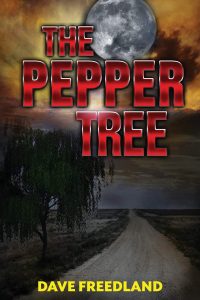 About The Pepper Tree By Dave Freedland

A Southern California landmark primarily known only to law enforcement earned a reputation for crime scenes of the most unspeakably vicious homicides. Infamous serial killers had chosen this location to discard and display their victims as trophies of their horrific deeds. Lieutenant Scott Hunter must lead a team of detectives to identify and capture a perpetrator who’s targeting young women, and has chosen this landmark to showcase his victims.

This story is a work of fiction, but the Orange County location is real. So notorious, in fact, that those officers working the graveyard shift need only radio their activity at a site bearing two words, and they are immediately dispatched a back-up officer to the “pepper tree.”

As a young patrol officer, Hunter had been introduced to the “terror at the tree” on an evening when he turned his police cruiser down that dusty road separating asparagus fields, and discovered a corpse hanging from a low-hanging limb. But now as the leader of the Robbery/Homicide team, he received that most dreaded call interrupting the stillness of the night, a body dump.

Dave Freedland is a 34-year decorated law enforcement professional having served with the Irvine (California) Police Department. Following a competitive athletic career culminating with the award of “UCLA’s Most Valuable Gymnast,” he graduated 1st in his Sheriff’s academy class. As a SWAT team leader and commander for over 25 years, he supervised operations for numerous barricade and hostage incidents, and was the recipient of several awards including “Police Officer of the Year” and the “Meritorious Service Award.” He retired at the rank of Deputy Chief, and currently holds a 6th degree black belt in Japanese Shotokan karate. His first novel, Lincoln 9, was Oak Tree Press’ best-selling book on Amazon in 2015. His second novel, The Pepper Tree, published by Aakenbaaken & Kent, received a 2018 manuscript award from the Public Safety Writers’ Association.