You are here: Home / New Books / The Persistence of Memory Book 1: Deja Vu by Karen Janowsky 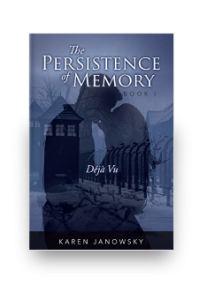 About The Persistence of Memory Book 1: Deja Vu by Karen Janowsky:

When superheroes fall in love, anything can happen.

Daniel Hecht doesn’t belong in this century. Catapulted into the present from 1943, he’s out of place and out of touch. Still, he was the American war hero called “Lionheart” and his heroism has followed him into the modern world. He now leads an underground group of superpowered misfits, but the misfit he keeps turning to is Nina Asher.

Nina has a vast knowledge of history, yet no idea who she is or where she’s from. She has become the target of dangerous creatures that have appeared all over the world. As she and Daniel work to decipher an ancient, cryptic myth, they experience flashbacks to things that never could have happened. They are falling in love, but there’s something they’re sure they need to remember, and it’s keeping them apart.

The key to saving the world may begin with the act of remembering.

Author Bio:
Karen Janowsky has loved superheroes and ancient mythology since the first time she saw the Super Friends on television in 1970’s. Because flying an invisible jet was never a viable career option, and because running around in a cape, swimsuit, and bright red boots is not socially acceptable for adults, she teaches yoga and writing at the College of Southern Maryland. Her stories and poems have been featured in several anthologies and literary magazines since 1991. She received her master’s degree in English from Florida State University.