You are here: Home / Featured Books / The Race is Run: An Indictment of Creedal Christianity by Vynette Holliday 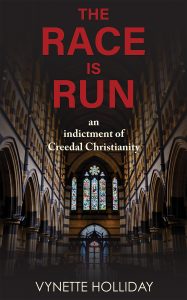 About The Race is Run: An Indictment of Creedal Christianity by Vynette Holliday:

This work demonstrates that the core teachings of the major denominations of Christianity such as the Virgin Conception/Birth, the Incarnation and the Trinity are not based on either the Hebrew Scriptures or the New Testament but rather are drawn from the Hellenist-Latin theologies and philosophies of the Church Fathers as expressed in the Christian Creeds formulated and formalised through the medium of the Ecumenical Councils convened between the years 325 AD and 451 AD.
Ignorance of Israelite thought, concepts, cultural norms and literary styles, together with the Fathers’ existing predilections, facilitated the creation of the cult-like figure “Jesus Christ” fashioned according to their image and their values.
This work also demonstrates that the Christian teaching of Supersessionism contributed to the centuries of Jewish persecution which ultimately led to the Holocaust. Responsibility for this descent into the abyss must be attributed in large measure to a multi-generational failure by those many teachers who either did not know, or did not distinguish between the various categories of persons designated a “Jew” in the New Testament.
In addition, the work challenges the concept of Immortal Souls, soul destinations called Heaven and Hell, and re-contextualises many other teachings and concepts such as Sin, Salvation, Atonement, Faith, Works, Justification and Grace.

Author Bio:
Vynette has a university level background in the Classics, Ancient History and Ancient Semitic Languages including Biblical Hebrew. This work is the culmination of decades of intensive investigation into the documents of the Hebrew Scriptures and the New Testament utilising knowledge gained in these fields and associated disciplines. Vynette’s research skills are extensive, having contributed several articles to United Press International and numerous research papers and essays to online sites where they have been made freely available for readers. Her research is not limited to the subject matter in this book but extends into other areas such as Queensland Museum investigations into the early history of the Queensland Royal Flying Doctor Service and the early years of pioneer aviation. Her contributions in this field are noted in newspapers of the day and in works by E.P. Wixted: The last flight of Bert Hinkler and The life and times of Sir Charles Kingsford Smith.