You are here: Home / Fiction / The Rebel and the Runaway: A Tale of Smuggling 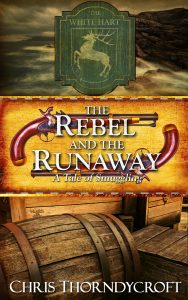 About The Rebel and the Runaway: A Tale of Smuggling

Could YOU love a murderer?

In February of 1746, a customs official and a key witness vanished on their way to trial, leaving nothing but a bloodied coat on the road. The details of their gruesome fate became one of England’s most shocking murder cases.

Witness to the crime is teenage runaway Alice Sinclair whose tumultuous journey led her to employment as a barmaid in The White Hart; a grubby inn on the border between Hampshire and Sussex. Alice had no idea that her new companions were members of the notorious Hawkhurst Gang; the most feared and violent group of smugglers in all England.

Alice soon finds herself adrift in a maelstrom of murder and betrayal and is forced to question her loyalties when she discovers that the man she loves is involved in smuggling, murder and the Jacobite uprising against the Crown. On the run, in peril and torn between family and love, Alice’s story is one of passion and defiance entwined with a true crime that shocked the nation.

Based on true events.

Chris Thorndycroft is a British writer of historical fiction, horror and fantasy. His early short stories appeared in magazines and anthologies such as Dark Moon Digest and American Nightmare. His first novel under his own name was A Brother’s Oath; the first book in the Hengest and Horsa Trilogy.