You are here: Home / Adult / The Silver Sunday: A Tale of Hypnotic Seduction 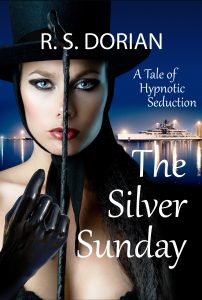 About The Silver Sunday: A Tale of Hypnotic Seduction:

Trent Jacobs, a server on the crew of the luxurious motor yacht, Silver Sunday, cannot believe his luck when he receives an invitation to an overnight dinner party from the yacht’s owner, Sophia Rubinstein. After talking his girlfriend into attending, the two find themselves out to sea for one night with a strange assortment of guests, and a bizarre troop of entertainers. However, it is the yacht’s owner who is even more mysterious, seductive, and enticing than he ever could have imagined. Anxious to know why a server on the crew would receive an invitation by a woman as brilliant, wealthy, and beautiful as their hostess, he learns that there is much more to his being aboard than courtesy. What happens when a woman who is so hard to resist makes an offer he cannot refuse? He just might find out the hard way.

Author Bio:
R.S. Dorian is a graphic designer from New York City. In the course of his career as an illustrator in engineering, architecture, game development, and web design, he has also worked as a ghostwriter for two novels. He has also written blog posts, screenplays, story line narratives, and numerous short stories. His newest venture, Moonlight Alley Books, showcases his upcoming mystery/suspense series, releasing in October of 2020. He now lives and works in eastern Tennessee.