You are here: Home / How To / The Sixty Second Business by Jon David 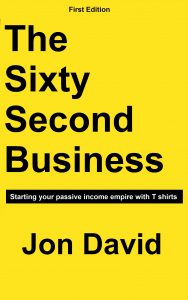 About The Sixty Second Business by Jon David:

Have you ever dreamed of creating your very own business that would make you money while you’re sitting on a beach in Mexico, sipping on strawberry daiquiris? Well it’s time to wake up. The Sixty Second Business is a comprehensive guide on how to start a passive income empire, with little time and money down. Using the power of the interwebs, this book will show you how you can create a quick and easy business selling T shirts. In sixty seconds or less, you can have your business up and running, making you money while you sit back and enjoy the fruits of your labors. Using the Skin in the Game Theory, we’ll have you up and running in no time, giving you an entrepreneur mindset. It’s time to get up off your couch and start living life to its fullest

Author Bio:
Jon David is just a regular guy who’s tired of working for his money. A marine engineer, Jon usually finds himself in the middle of the ocean on large cargo ships. With tons of free time, Jon decided to look into sustainable passive income strategies. After doing the necessary research, Jon launched his first automated T-Shirt business as a proof-of-concept. Two months later, he realized that his so called ‘experiment’ was blowing up, and had actually morphed into a legitimate business. Realizing that dropshipping was a legitimate way to make money, Jon set about creating his passive income empire.

Numerous businesses later, Jon has decided to share what he learned in a quick, to-the-point book so that just about anyone can start earning passive income today.

When he’s not in the middle of the ocean, Jon enjoys normal guy hobbies like working on his car, learning to rock climb, 3D printing and collecting watches.