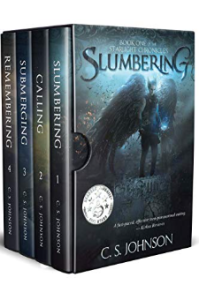 IT’S HERE AT LAST – THE STARLIGHT CHRONICLES, COLLECTOR’S BOXED SET, BOOKS 1-4, with SHORT STORY EPISODES IN BETWEEN EACH BOOK!

Hamilton Dinger has a nearly perfect life as he enters into tenth grade at Apollo Central High School. He has the grades for the top of the class, the good looks, and the charm to get away with just about anything. There is no need for him to believe in anything other than himself, and the idea of good and evil is laughable.

But all that changes when a meteorite strikes his town, and the Seven Deadly Sinisters, and their leader, Orpheus, are released. They prey on the city residents, collecting their souls for energy and nefarious purposes. As this is happening, Hamilton’s longtime dormant supernatural powers are awakened, and he discovers he is a fallen Star. And not only that, he has been called to seal away the Sinisters once more – all to Hamilton’s dismay.

As the supernatural calling interrupts his perfect life – with his friends at school, his fame on the football team, and his prestigious job at the mayor’s office – Hamilton finds a mix of relief and further aggravation in Elysian, a changeling dragon who declares himself to be Hamilton’s “mentor,” and Starry Knight, Hamilton’s infuriating, secretive, and powerful co-defender, another fallen Star who has the power to seal away the Sinisters and their soul-sucking minions.

Can Hamilton and his team find a way to work together to save Apollo City? Can Hamilton overcome his own selfish desires to find the will to fight? Find out in the first part of this epic fantasy adventure series about superheroes, fallen Stars, and high school from C. S. Johnson!

C. S. Johnson is the award-winning, genre-hopping author of several novels, including young adult sci-fi and fantasy adventures such as the Starlight Chronicles series, the Once Upon a Princess saga, and the Divine Space Pirates trilogy. With a gift for sarcasm and an apologetic heart, she currently lives in Atlanta with her family. Find out more at http://www.csjohnson.me.