You are here: Home / New Books / The Student and the Slave (Krillonian Chronicles Book 3) 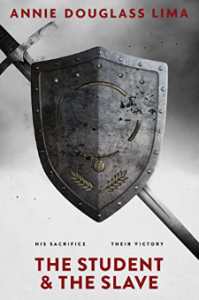 About The Student and the Slave (Krillonian Chronicles Book 3)

Is this what freedom is supposed to be like? Desperate to provide for himself and his sister Ellie, Bensin searches fruitlessly for work like all the other former slaves in Tarnestra. He needs the money for an even more important purpose, though: to rescue Coach Steene, who sacrificed himself for Bensin’s freedom. When members of two rival street gangs express interest in Bensin’s martial arts skills, he realizes he may have a chance to save his father figure after all … at a cost.

Meanwhile, Steene struggles with his new life of slavery in far-away Neliria. Raymond, his young owner, seizes any opportunity to make his life miserable. But while Steene longs to escape and rejoin Bensin and Ellie, he starts to realize that Raymond needs him too. His choices will affect not only his own future, but that of everyone he cares about. Can he make the right ones … and live with the consequences?

Annie Douglass Lima considers herself fortunate to have traveled in twenty different countries and lived in four of them. A teacher in her “other” life, she loves reading to her students and sparking their imaginations. Her books include science fiction, fantasy, YA action and adventure novels, a puppet script, poetry, Bible verse coloring and activity books, and a cookbook. When she isn’t teaching or writing, Annie can often be found sipping spiced chai or pomegranate green tea in exotic locations, some of which exist in this world.