You are here: Home / New Books / The Wayward Son 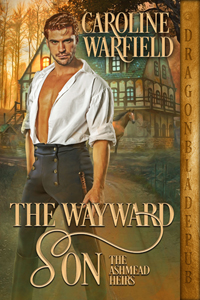 About The Wayward Son

Sir Robert Benson’s life is in London. He fled Ashmead the day he discovered the man he thought was his father had lied to him, and the girl he loved was beyond his reach. Only a nameless plea from his sister—his half-sister—brings him back. He will not allow a ludicrous bequest from the earl who sired him turn him into a mockery of landed gentry. When a feisty little termagant with flashing eyes—and a musket—tries to turn Rob off the land—his land—he’s too amused and intrigued to turn away. But the longer he stays, the tighter the bonds that tie him to Ashmead become, strengthened by the powerful draw of the woman rooted on land he’s determined to sell.
Lucy Whitaker’s life is Willowbrook, its land, its tenants, its prosperity, but she always knew it wasn’t hers, knew the missing heir would come eventually. When a powerful man with military bearing rides up looking as if he wants to come in and count the silver, she turns him away, but her heart sinks. She can’t deny Rob Benson his property; she can only try to make him love the place as she does, for her peoples’ sake. A traitorous corner of her heart wishes Rob would love it for her sake.
His life is London; hers is Ashmead. How can they forge something lasting when they are torn in two directions?

Caroline Warfield is the pseudonym of a writer who wishes she had walked through fascinating times in the shoes of one of her characters—but which one?
Caroline has been at various times an army brat, a librarian, a poet, a raiser of children, a nun, a bird watcher, an Internet and Web services manager, a conference speaker, an indexer, a tech writer, a genealogist, and, of course, a romantic. She has sailed through the English channel while it was still mined from WWII, stood on the walls of Troy, searched Scotland for the location of an entirely fictional castle (and found it), climbed the steps to the Parthenon, floated down the Thames from the tower to Greenwich, shopped in the Ginza, lost herself in the Louvre, gone on a night tour of the Singapore zoo, walked in the Black Forest, and explored the underground cistern of Istanbul.
By far the biggest adventure has been her many (many!) years of marriage to Beloved, a prince among men.
Having retired to the urban wilds of eastern Pennsylvania, she reckons she is on at least her third act, happily working in an office surrounded by windows while she lets her characters lead her to adventures in England and the far-flung corners of the British Empire. She nudges them to explore the riskiest territory of all, the human heart.