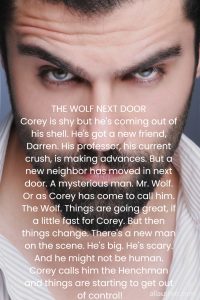 About The Wolf Next Door 3

Corey is, or at least was, your typical, if somewhat shy college student.
An introvert with a vague anxiety disorder that he’d received treatment for, but that he still has to manage.
His life has recently taken a turn. The creepy mansion next door to his home has recently been purchased by a mysterious man. Corey is suspicious of him, and so he should be, for the man may not be a man at all. He is, at the very least, far more than he appears!
At the same time, he’s developing a friendship with Darren, a wild and outgoing guy at school. His crush on one of the professors has evolved and after an encounter in a motel room, he’s wondering if there was more to it for his teacher than just another student conquest.
Then there’s Gord – popular jock with a bit of a predatory streak.
He’s got his eyes on Corey.
Then, finally, there’s the Henchman – a strange shapeshifting creature that appears human until it doesn’t.
Between Darren, his professor, Gord, the mysterious man next door, and the Henchman, Corey has his hands full.
Things aren’t out of control.
Not just yet.
But the night is still young!

A lonely scribe toiling away in the wee hours of the night about naughty men doing naughty things! Have many books published on Amazon and Kindle Unlimited. I’m sure you’ll find one to tickle your fancy!