You are here: Home / Horror / Through the Ages by David Miller 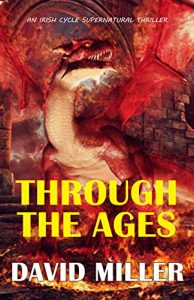 About Through the Ages by David Miller

It’s darkest before the dawn, but is it darker than a vampire’s soul?

For 400 Years Saito Izumi Has Struggled with What It Means to be Kyuuketsuki–A Japanese Vampire!

In Feudal Japan, during an attack on Kumamoto Castle from a horde of swarming yōkai— mythical creatures born from the darkest depths of Japanese folklore—the samurai Saito Izumi will be forever changed. By morning’s dawn, Saito will be kyuuketsuki, a Japanese vampire!

Join Saito in Feudal Japan as she confronts an army of thunder-beasts, ogre-like oni, and the seductive spider-whore jorōgumo. Creatures as diverse as they are deadly. Then travel with the former samurai as she battles 18th Century Spanish soldiers and vampires along the Spanish Main. Stand with her as she wages war against shape-shifting Mexican nagual, fighting alongside the likes of Davy Crockett, William Travis, and James Bowie to defend the Alamo.

In this heart-wrenching collection of original stories are four terrifying tales from Saito Izumi’s centuries of existing—she doesn’t consider it living—that explore her dangerous and deep personal journey to understand the blackest darkness of an inhuman soul, to discover what it means to live and not simply survive, and most important of all, to learn if a vampire can triumph over evil and truly love again.

The Irish Cycle Series – A unique urban fantasy adventure with a mix of mythological and supernatural elements set in contemporary and historical America.

DAVID MILLER grew up in New York in the early ’70s watching Dark Shadows during the day, the Night Stalker at night, and the weekly Creature Feature movie on an old black & white RCA television set every Saturday night with his father where Frankenstein, Dracula, and the Wolfman came alive for him.

It’s no wonder his favorite TV past time today are Supernatural, Buffy & Angel, and his newest favorite; Wynonna Earp. Or that as an adult he now writes stories with fantastical creatures, mystical happenings, and occult goings-on, of worlds where anything can happen…and usually does.