You are here: Home / Fantasy / Trial by Sorcery by Richard Fierce 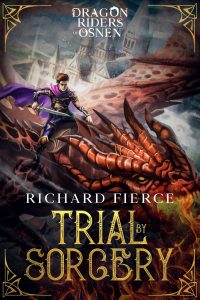 About Trial by Sorcery by Richard Fierce:

Dragons can be dangerous …

… if you don’t bond with them first.

Eldwin wants to follow in his father’s footsteps and become a Dragon Guard, but not for the glory. With his family dead and their lands dying, the opportunity to join the dragon rider school is all he has. But before Eldwin can bond with a dragon and guard the skies, he must pass three tests to prove his worth.

He’s determined to pass, but his maimed arm is a constant reminder of his disadvantage. Will the obstacles Eldwin faces keep him from reaching his dreams, or will he finally see what it’s like to ride the skies?

Author Bio:
Hey! My name is Richard Fierce and I’m a fantasy and space opera author. I’ve been writing since I was a child but began publishing in 2007. Since then, I’ve written multiple novels and short stories.

In 2000, I won Poet of the Year for my poem The Darkness. I’m also one of the creative brains behind the Allatoona Book Festival, a literary event in Acworth, Georgia.

A recovering retail worker, I now works in the tech industry when I’m not busy writing.

I’m married and have 3 step-daughters (pray for me), three dogs (two huskies!), three cats, two ferrets and a fish. Basically, I have a zoo.

My love affair with fantasy was born in high school when a friend’s mother gave me a copy of Dragons of Spring Dawning by Margaret Weis and Tracy Hickman.