You are here: Home / Adult / Tutoring the Queen by Sable Rose 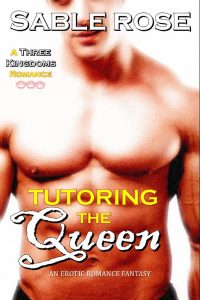 About Tutoring the Queen by Sable Rose

She’s a sexually inexperienced queen. He’s her slave determined to teach her an unforgettable lesson…
Queen Atania is a woman torn in two directions:
On one hand, she strives to follow the example of her late mother, the bottled-up former queen, by enforcing Divine Law in the kingdom over which she rules. Divine Law demands that anyone worshiping any other god but the state-sanctioned one must be punished.

Having grown up under a law that promotes sexual repression, Atania’s sexual experience is limited. Although, there’s that part of her that hungers for more.
When she receives the gift of a slave taken from a neighboring kingdom named Roka, the absolutely most delicious-looking man she’s ever seen, Atania realizes that it’s her chance to explore the depths of that deep inner hunger.

Unimpressed by her royal status, Roka sets about teaching her the joys of sexual liberation. Atania is swept away in an avalanche of desire by his kisses, touch and taste.
But then, Roka challenges her to take a stand: to choose him.
What to do?
But before she can make a decision, something calamitous happens.
Having learnt that she has broken Divine Law, a faction of nobles seek to depose her.

Queen Atania is facing a desperate situation; one she’s never encountered before…
One that could lead to the loss of her throne, her liberty and her man…

Warning: readers who read Sable Rose’s books tend to turn into avid fans! Sable Rose is a romance writer and the author of erotic contemporary and paranormal romances and action adventures.
Her books feature outspoken, independent and intelligent women who know what they want (and what they don’t want), and who are not afraid to make the first move to get their man, if they have to. Their men are always swoon-worthy hunks, each a blend of naughty and nice that women find so irresistible.
Sable hopes to one day find time to learn both pole-dancing and belly dancing. She adores traveling and has visited over 15 countries. She uses these experiences to craft her stories.