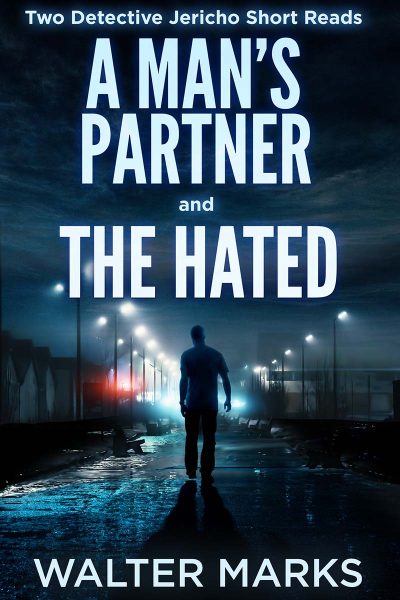 This book combines two Detective Jericho Series novels, which are novella length. THE HATED draws Jericho into the violent world of hate groups in Eastern Long Island. A MAN’S PARTNER is a noir-ish tale that brings Jericho back to New York City, to investigate the death of his former NYPD Homicide partner. Both titles have 4.3/4.4 star Amazon ratings and are fast, exciting reads with shock endings.

Buy the book, and follow the author on social media:
Learn more about the writer. Visit the Author’s Website.
Get This Mystery Book From Amazon.

Author Bio:
Walter Marks is probably best known for his song “I’ve Gotta be Me”, recorded by Sammy Davis, Tony Bennett, Michael Jackson and many others. He has also written songs recorded by Barbra Streisand, The Temptations, Ella Fitzgerald, Little Anthony and the Imperials, Steve Lawrence, Eydie Gorme, and other artists.
He wrote the songs for the Broadway musicals “Bajour” and “Golden Rainbow”, the book, music and lyrics for the off-Broadway musical “Body Shop”, the screenplay and songs for the motion picture “The Wild Party” (Merchant-Ivory Films – directed by James Ivory). He also wrote the off-Broadway comedy-mystery “The Butler Did It”.
On television, he won an Emmy award for his music on the PBS Series “Getting On”, and wrote songs for the ABC series “That’s Life”, and the NBC Hallmark Hall of Fame production of “Pinocchio”.
His musical “Langston in Harlem” was produced in NYC at Urban Stages. The show won 4 Audelco/Vivian Robinson Awards for Excellence in Black Theater, including best musical. The show is now headed for production by the Classical Theatre of Harlem.
His other current theatre projects are — “Dig Lenny Bruce” a musical about the controversial comedian, and “Jack Johnson at Hubert’s Dime Museum and Flea Circus”, a show about the first black heavyweight champion of the world. Also, he wrote the libretto to “My Shining Hour” featuring the songs of Johnny Mercer.
Walter Marks’ first novel ­— “Dangerous Behavior”, a psychological thriller, was purchased by Paramount Pictures.
His second book is a crime/thriller introducing Detective Jericho — “Death Hampton”. (Top Tier Publishers) available on Amazon (print) and Kindle. The sequel — “The Battle of Jericho” and the Amazon Kindle Singles “The Hated” and “A Man’s Partner” are also for sale. Other Jericho novels are “Amazing Detective” and “Tumbling Down.” and “Shocking Confessions”. Also out now, “Rip Saw”. Plus — a sequel to “Dangerous Behavior” — “Deadly Behavior”
In addition, he has produced and written the musical score for a documentary film on Hustler publisher Larry Flynt, which is directed by his wife, prizewinning documentary filmmaker, Joan Brooker-Marks.
He lives and works in Manhattan and East Hampton.