You are here: Home / Featured Books / Under Secrets by Adam Carlos 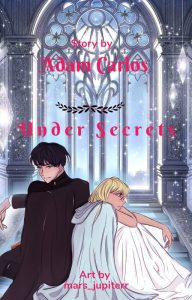 About Under Secrets by Adam Carlos

During the war between the Kingdom of Greavaria and the Empire of Promor, Magdaleena Montgomery the Queen of Greavaria Kingdom gave birth to a boy, but before she die, she asked her escort to hide the fact that the child she gave birth to was a boy, to avoid after he grows up as a Prince have to face the war.
So this boy, Dylan since his birth, everyone believed he was a girl and after he reach the age of 4 years he went to live in a convent.
Eighteen years later, the war between Greavaria Kingdom and the Promor Empire ends and, for seal peace Dylan is forced to get back to his homeland to marry Archie Seanford, the first son of the Empire of Promor.
How will Dylan a man and heterosexual be able to deal with this marriage?