You are here: Home / Mystery / Undercover Geisha by Judith Cranswick 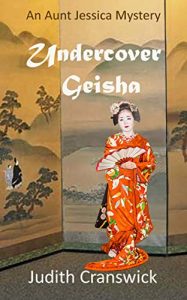 About Undercover Geisha by Judith Cranswick

A perilous race across Japan to uncover the geisha’s secret.
Harry and Aunt Jessica’s holiday tour of Japan takes a dramatic turn when Harry witnesses the stabbing of a geisha. As the woman dies in his arms, she entrusts him with a secret and dangerous mission, to deliver a key to White Tiger. The geisha has mistaken Harry for someone called Fox. Who is the real Fox, where and who is White Tiger and what does the key open? Unless he and Aunt Jessica can unravel the mystery, they too could end up dead.

Judith has three passions in life – writing, travel and history – and combines all three in her novels.
She was born and brought up in Norwich and now lives with her husband in Swindon in Wiltshire. She wrote her first novel (now languishing in the back of a drawer somewhere) when her two children were toddlers, but there was little time for writing when she returned to work. Only after retirement was she was able to take up writing again in earnest.
Judith’s first two published novels, ‘All in the Mind’ and ‘Watcher in the Shadows’ each won the NAWG Award for Best Unpublished Novel for two years running.
She is the author of the popular Fiona Mason Mysteries featuring a tour manager for a coach company. Each book is set in a different European country. Her new series feature Aunt Jessica who is the accompanying historian on holidays to more exotic parts of the world.