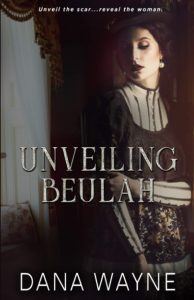 About Unveiling Beulah By Dana Wayne

She’s Running From the Past

The jagged scar on Bea Lockhart’s face never lets her forget she’s damaged goods, unsuited for marriage or society. Hidden in the shadows, she efficiently runs her father’s fashionable New York mercantile, and it becomes the place for the social elite to shop.

But her soul cries out for more, making her easy prey for a handsome rogue who destroys her trust. Shattered, she flees to a small town in Texas.

He Wants a Family

Lucian Moreau was raised by his wealthy, unsympathetic grandfather. An educated world traveler, he had everything a man could want. Except a family.

When his grandfather proposes an arranged marriage between two powerful New York dynasties, Luc agrees, believing the union will provide what he lacks.

Instead, betrayal forces him to see the charade his life has become. Angry and hurt, he leaves everything behind to start over in Texas.

Past and Present Collide

Haunted by deception and a lifetime of loneliness and rejection, these two lost souls find love at last.

But when the past and present come together, will their love be strong enough to stop the collision from destroying their future?

Multi-awarding winning author Dana Wayne is a sixth-generation Texan and still resides in East Texas. A sought-after public speaker, she is a die-hard romantic, and her stories are filled with strong women, second chances, and happily ever after.

“I’m all about the romance, so my books are heartwarming with a splash of humor and suspense. While they are a bit steamy, I believe true romance is more about emotion than sex, and the journey is more important than the destination.

“My debut novel, Secrets of The Heart, published in 2016, garnered first place in a state-wide contest, and I’ve never looked back. Since then, all of my books have been nominated for and or received various awards and consistent five-star reviews. To have my work validated in such a manner is very gratifying and humbling.”