You are here: Home / Featured Books / Verdicts and Vows 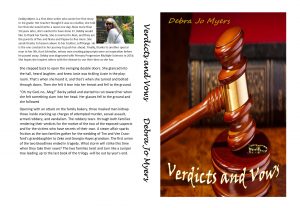 About Verdicts and Vows

She stepped back to open the swinging double doors. She glanced into the hall, heard laughter, and knew Josie was tickling Lizzie in the playroom. That’s when she heard it, and that’s when she turned and bolted through doors. Then she felt it tear into her breast and fell to the ground.
“Oh my God, no…Meg!” Becky yelled and started to run toward her when she felt something slam into her head. Her glasses fell to the ground and she followed.
Opening up with an attack on the family bakery, three masked men torment those inside stacking up charges of attempted murder, sexual assault, armed robbery, and abduction. The robbery tears through the Crawford and Hayes families. A steamy affair sparks friction just as the two are forced together again at the wedding of Tim and Vee Crawford’s granddaughter to Zeke and Georgia Hayes’ grandson. The two bloodlines were introduced in book one of “The Vee Trilogy” entitled “Vex and Valor.” That first union ended in tragedy. The two families grow together twisting and turning like a Juniper tree. “Verdicts and Vows” will being readers closer to the unfinished narratives that will be wrapped up in book 3, due out by the end of this year. You will say goodbye to some characters and meet new ones. If you read the first book, you’ll want to read them all!

Debby Myers is a first-time writer who wrote her first story in 1st grade. Her teacher thought it was so creative, she submitted it to Children’s Digest where it was published the same year. It was way back then when she told her that she would write a novel one day. Now more than 50 years later, she’s excited to have published “Vex and Valor,” and “Verdicts and Vows” the first two books of “The Vee Trilogy.”

Debby would like to thank her family. She is married to Alan, who she says is the greatest man she’s ever known. They are the parents of five and Nana and Papaw to five more. They live in Indiana in the small town of Peru, which is the “Circus Capital of the World,” home to both the Circus Hall of Fame and the Peru Amateur Circus, that Debby performed in for ten years starting when she was six. Debby began her career creating a day care center “Debby & Christy’s Day Stay” caring for 10-12 children. This allowed her to be with her children when they were young. She then worked as the “voice of the morning show” & news director for local radio station WARU, before going on to become a manager for Kroger. She sends thanks to heaven above to her brother, Jeff Range. He is the one constant in her journey to write a novel, telling her to use her gift. Finally, thanks to another special man in her life, Kurt Schindler, whose own writing and creating stories were an inspiration in her journey before he passed away.
Debby was diagnosed with Primary Progressive Multiple Sclerosis in 2016. Her condition is stable, and she has written a number of short stories about her experiences living with this odd disease. She hopes she inspires others with the disease to use their time as she has.
The final book of the trilogy “The Vee Trilogy”saga will be out by the end of the year.