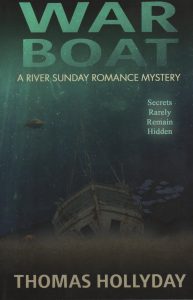 About War Boat by Thomas Hollyday

Don’t miss this thriller! Back in 1941, Nazi U-Boats infiltrated the Chesapeake Bay. Local lives were lost defending their town of River Sunday – but was a traitor involved? Now, grandson John Thornton risks his life to uncover the secret Nazi plan that could have changed America forever.

Author Bio:
Thomas Hollyday (1942-present grew up in the southern atmosphere of the Eastern Shore with its maritime and military heritage. He studied writing with Elliott Coleman at the prestigious Johns Hopkins Writing Seminars and with Michael Curtis of the Atlantic Monthly. He served with distinction in Vietnam and became a successful international businessman. He also drew illustrations for national magazines and published Chesapeake maritime and Civil War history. He currently edits you tube videos and WordPress blogs for animal water rights and for book reviews. Two of his books have featured his humorous Animal Viewpoint Cartoons. In his River Sunday Romance Mysteries the underlying theme suggests human settlers since prehistoric times in the Chesapeake region have left a mist of legend and history that permeates its modern stories. At the same time his characters face the power of modern technology for good and evil. Each novel, located in the small town of River Sunday, Maryland, records the continuing beautiful nature of the area. His writing portrays today’s problems, conflicts, and memorable local characters with their loves and their combat with evil.