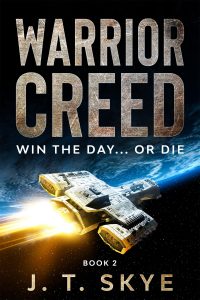 Alien empires reeling from war. Their arrogant elite are desperate for glory.
A human hero just robbed them of that.

The galaxy is filled with many races driven by their arrogant elite, who are desperate for glory.

The galaxy had other plans… and why was it so hard to KILL a Human from Terra, anyway?

Derek Hamilton helped to end the 1,000 year Slave War between the Brinlo and Hogantha. Now, Earth was in ruins and war machines were unwinding everywhere across the galaxy.

The arrogant, wealthy Elite Houses were furious a mere Terran had the skill to kill the hated Brinlo Battle Commander Jorad Zen. It was their right of prestige, privilege and honor… and the HATED human was the one to take the kill.

So they took their fury out on him, but not before he displayed the toughness and unique abilities that make a human Warrior.

Trap after trap, and space battle after space battle, test his skill and expertise until the final battle against a Goliath class Dreadnought warship more than a thousand times bigger than his.

Can he survive? Can the 36 Elite Warriors and their gear crammed into his cargo bay survive?

Warrior Creed is the second in the Warrior series starring Derek Hamilton of Earth. This military science fiction and action adventure space opera will grab you from the start and never let go.

Buy this book now so you can become part of this epic tale in the style of the golden age of sci fi. The only way to experience the Warrior Creed and join Captain Hamilton on his galactic exploits is to grab your copy now. Don’t wait, or Captain Hamilton will have already Jumped to another transit point far across the galaxy.

Remember the Warrior Creed, Win the day… or die.

I created the Trigellian Universe as the central playground of all of my Sci Fi Space Opera, Science Fiction, Action-Adventure and Military Sci-Fi series stories – 17 novels in 4 series.

I love to write stories of heroic quests, ancient prophecies and mythical journeys along roads less traveled. They include grand, military space battles, secret alliances, desperate treachery, vengeance and retribution against the arrogance, elitism and glory hunting found at the highest levels of society.

From pirates, slavers, saboteurs and assassins… to elite Warriors, trader families, cargo haulers and the many desperate refugees just trying to escape conscription, buy air to breathe and just live. . . one more day.

If you love Sci Fi, Fantasy and Action Adventure, join me on the journey of a life time. Be sure to sign up and collect your free stories at JTSkye.com.