You are here: Home / New Books / We Are Gargoyle 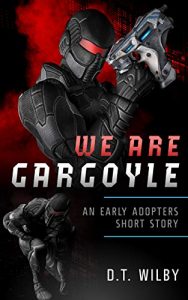 About We Are Gargoyle

Be an ideal. Be The Gargoyle…

But some nights, even ideas can bleed.

A crooked politician, caught in the midst of a national scandal looks to skip the country with help from MiliTech, the shady tech and arms multinational who got him into the whole mess in the first place.

Little do they know that the augmented vigilante Gargoyle is hunting them and isn’t prepared to let them get away with it all so easily. But on nights like these, everyone loses something.

This is where it all begins. Take your first step into the Early Adopters Universe in We Are Gargoyle.

The Early Adopters are a group of misfits and outcasts who underwent genetic editing decades ago under the auspices of scientific research. They thought they were going to save the world, however for MilliTech, a shady tech and arms multinational far too cosy with the world’s military organisations, the plan was very different.

Outside of their honeymoon period, they are disavowed and relentlessly pursued by their creators. The Early Adopters do the best they can to stay one step ahead, stay out of each other’s way and maybe do a little good while they can.

D.T. Wilby is a science fiction author living in the U.K. His particular area of interest is near future science fiction and the impact new technology may have on society and our future. Often his interest is pricked by a tech story on the news which niggles away until it develops into something like the idea for a new novel.

Both of his full length novels, Ringer and Central Locking, feature everyday protagonists struggling against the extraordinary circumstances technology places them in.

As well as his stand alone novels, D.T. Wilby is developing his Early Adopters short story shared universe, with the Novella Star Crossed as the first Amazon release in the series.Early Adopters follows a rag-tag bunch of genetic experiments, on the run from their mendacious creators.